Everyone loves a good story. In fact, narrative is so essential to our humanity that God reveals himself to the world in a story. Art and the humanities are full of narrative elements. Symphonies and string quartets develop themes and motives to create sonic stories which include rising tension, a climax, and a resolution. Even 30-second commercials present stories of despair-turned-to-joy and promise us the same happily-ever-after if we buy their products. 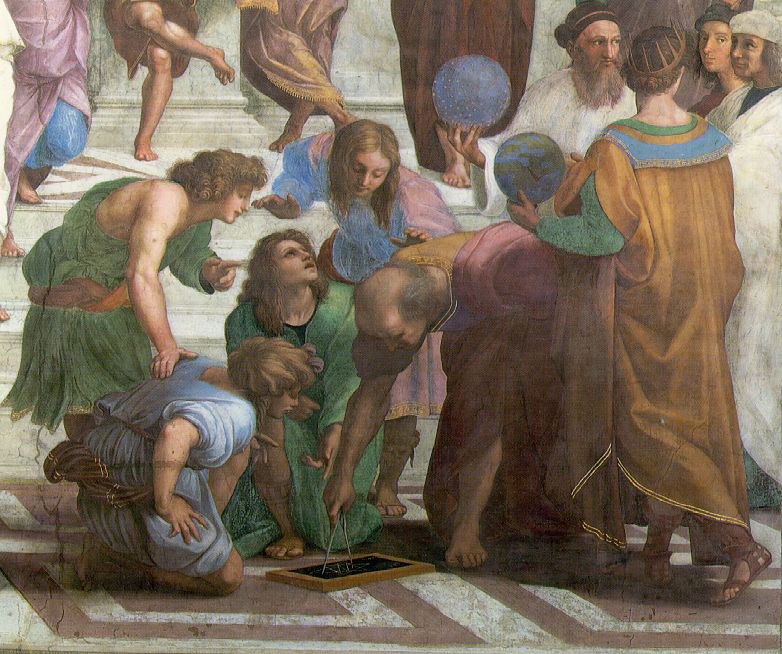 Mathematics too is like a story. That may seem a strange idea, yet it seems strange only because we don’t usually teach mathematics as if it were one of the humanities––which it is. We are happy to teach literature and history and theology through discussion and essay assignments, but suddenly change tactics for mathematics. But what if we taught mathematics in a more human (and perhaps humane) way? What if we taught math in narrative contexts? First, however, I should explain what I mean by saying that math is like a story.

One of the clearest examples of the narrative quality of mathematics can be found in the greatest geometry text to come out of the ancient world: Euclid’s Elements. The Elements is divided into 13 books, the first 6 of which form the basis for what is still taught in high school geometry.

Euclid begins The Elements by presenting definitions, postulates, a few constructions, and the side-angle-side theorem for the congruence of triangles––and with that foundation laid, a world is opened for discovery. I can’t help but compare this beginning to the opening of Genesis. God creates the world out of nothing in six days, and Euclid creates a world out of concepts in 4 propositions.

After this grand opening Euclid unfolds several themes: first the triangle, then parallel lines, and finally parallelograms. Euclid’s handling of these themes is much like the development in a mystery novel where little observations soon uncover a complex web of intrigue. The climax of Book I occurs in the second to last proposition, which we know as the Pythagorean Theorem. Here, theorems on parallelograms and triangles suddenly unite to prove a beautiful and surprising truth: that squares built on the two sides of a right triangle are equal to the square built on the hypotenuse. Taken out of context and put in plain language as I have just done, the proposition seems hardly surprising or beautiful. But this too The Elements shares with the mystery novel. Unless we have followed the story it is not shocking to find out that a cook murdered a millionaire. Likewise, Euclid’s propositions are not surprising to anyone who is merely given them; the story must be read through from the beginning.

But reading the story through from the beginning is not an opportunity frequently given to students. As beautiful and precise as The Elements is, it is no longer used to teach geometry. The reasons for this are twofold. First, it is inefficient to wade through 46 propositions in order to teach the Pythagorean Theorem. It is far easier to simply tell students that A2 + B2 = C2. Second, textbooks are usually organized to present material in the most expedient way, rather than the way in which concepts actually developed and were discovered.

In other words, most textbooks take a CliffNotes approach and tell you all you need to know about the narrative without allowing you to encounter the narrative itself. This may seem an efficient way to prepare for tests but it misses the story and gives the student the impression that mathematics, like Athena, sprang full-grown from the head of Zeus (or from the textbook writers, in this case). The hidden tragedy is that test answers are much sooner forgotten than stories.

As a result, we often teach mathematics as if it were merely a list of skills to learn and concepts to memorize, and consequently treat students as robots to be programed rather than as souls to be cultivated. Students usually have no idea why certain concepts and formulas were developed, and even less idea where they came from. Consequently, students grow bored and frustrated and decide that they hate math.

This is precisely what happened to me in high school. I grew annoyed and confused and decided that math was less important––and certainly less interesting––than literature. Literature had a narrative I could understand; mathematics was nothing but a list of abstractions. Thus, teaching mathematics without properly introducing the narrative and expecting students to remain interested is like telling the punchline without telling the joke and expecting to get a laugh.

For the textbook, it doesn’t matter that Viete’s algebra was too bound to geometry (he didn’t believe one could add a squared number to a cubed number because it doesn’t make sense to add an area to a volume). Nor does it matter that a few years later Descartes simultaneously merged algebra and geometry and, through greater abstraction, liberated algebra from the constraints of geometry. If narratives like these do not matter to the textbook writers, we should not find it surprising when mathematical concepts and rules matter little to our students. But to a student who understands and appreciates the story, concepts do matter, because Descartes’s revision of Viete becomes a triumph on the level with the French discovery of the Rosetta Stone.

Despite my dislike of textbooks, there are several things they do well. They relay information efficiently and home schooling would be more difficult without them. Teaching from primary texts is, after all, messy and inefficient (but then, so is raising children). If you introduce a primary text into your math curriculum, you’ll find that it won’t fit neatly anywhere. Book I of The Elements won’t fit into your geometry textbook in any one place, nor will Viete’s The Analytical Art fit neatly into Algebra 1 nor Descartes Geometry into Algebra 2. The concepts from these and other works fall into textbooks in distilled, abridged, and reorganized forms––like meat in Spam or bologna.

Yet there is good news! Although textbooks remain the only option for many, growing numbers of home schoolers and classical Christian schools are finding ways to put primary texts back into math curricula. A good place to begin is with the first book of Euclid’s Elements. Although, as I said, it won’t fit neatly into your curriculum, Book I makes a great supplement to any high school math curriculum. It presents the basics of high school geometry in a logically complete system with fewer than 50 propositions, which makes it relatively easy to use alongside a modern textbook.

You may find, however, that the narratives, even in Euclid, are subtle and difficult to discover. But the work is worth the reward. When perception dawns, you may feel, as I have felt, that for a silent moment you stand upon a mountain overlooking a sun-splashed valley. And when this happens, you are thinking no longer as a mere student, but as a mathematician.